House Democrats have proposed renewing a flat $600/week federal supplement. Senate Republicans introduced a plan to target 70% wage replacement, with a cap on the weekly federal supplement of $500. The U.S. Chamber has recommended a similarly structured plan, with target replacement between 80% and 90% of an individual’s working wages (85% is used for the analysis below) and a supplement cap of $400. Under the Senate and Chamber proposals, if a state cannot conduct the individual calculations, each recipient will receive a flat $200 supplement.

Click on a state below to see how each proposal would affect that state — including how much the average unemployed individual would receive, wage replacement rates, and the increase compared to state-only benefits. Click here to view a table with the topline information for each plan in every state.

Update (Aug. 6): Sens. Collins, McSally, and Romney have intorduced a compromise proposal that starts with a flat federal supplement in August and September before targeting 80% wage replacement (with a $500 supplement cap) from October to December. The Chamber commended the middle-ground proposal, calling it "a sensible balance of maintaining vital income support during the pandemic while avoiding disincentives for returning to work." A state-by-state analysis of the impact of the new proposal can be viewed in this table; the map below will be updated soon to include the proposal, as well. 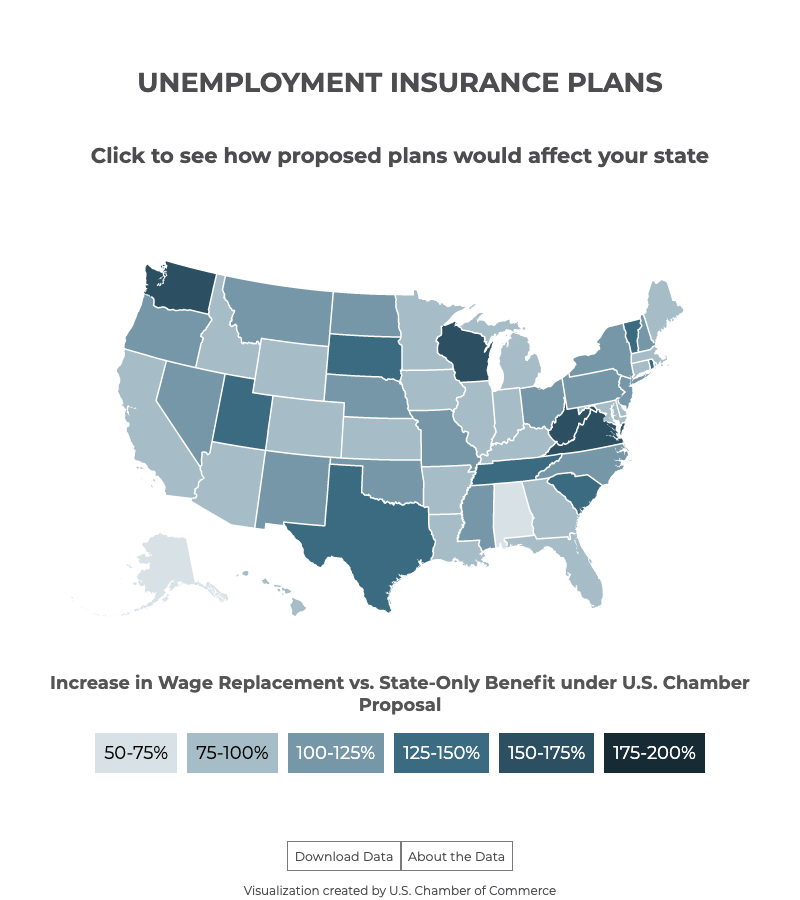 The interactive map will not load properly in this browser. Please visit this page with a modern browser. You can also download the data.

Our take: With more than 17 million Americans unemployed, Congress must support the unemployed while aiding in our nation's return to work. The Chamber has called for the $600 weekly federal supplement to be revised, as many workers under that program earned more on unemployment benefits. The Chamber's middle-ground proposal of 80% to 90% of a worker’s prior wages (with a $400/week maximum federal supplement) would see benefits gradually phase down based on a state's unemployment rate.

Congress also should provide funding for states to implement rapid reskilling and job connection programs to assist those least likely to return to their old jobs find new employment.

See the growth in unemployment claims in each state since March.