With the passage of the American Rescue Plan Act (ARPA) earlier this year, $350 billion in financial aid was extended to all 50 states at the statewide, county, and metropolitan level. This aid was offered with the intention that it would be used flexibly to enable states and localities to use those funds to best help their economies to recover from the economic downturn brought on by the Covid-19 pandemic. However, this aid was offered with a catch. A provision of the American Rescue Plan stipulates that these funds may not be used by states “directly or indirectly” to offset revenue reductions. (section 9901, P.L. 117-2)​.

This provision is written so broadly that it effectively prohibits states from managing their own tax codes. Moreover, the provision has a recoupment clause that allows Treasury to take back these funds should any state be deemed to violate this provision. To track this dynamic, the State and Local Policy Initiative has produced an interactive map: 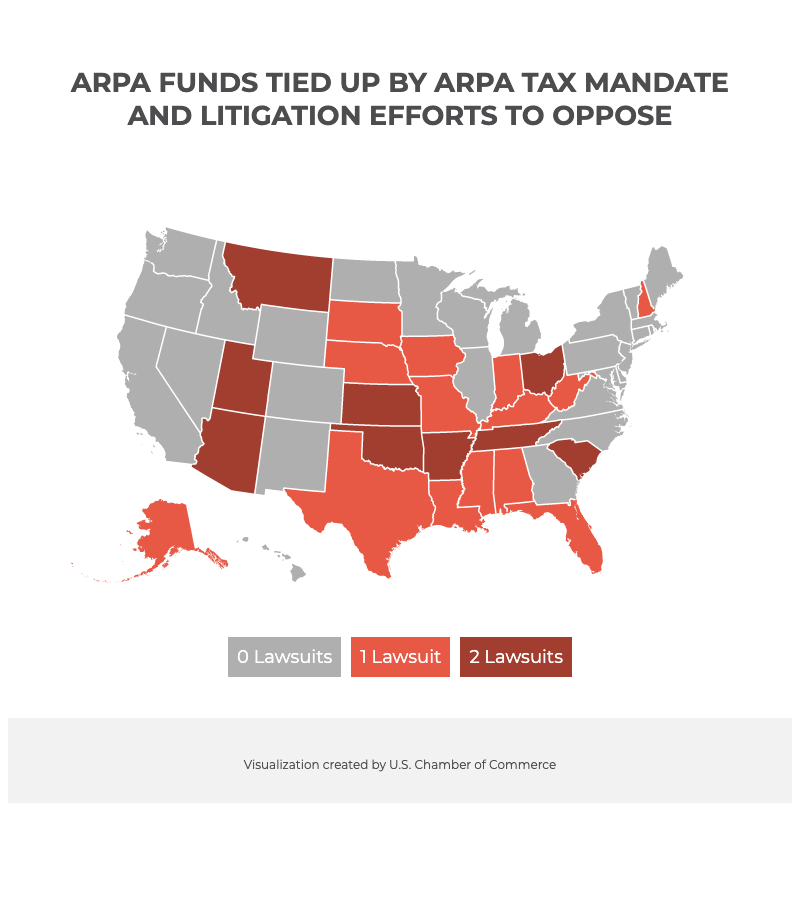 In response, 23 states have filed and signed on to 6 lawsuits against Treasury Secretary Yellin as an unconstitutional intrusion on states’ authority and autonomy. ​The U.S. Chamber of Commerce, in conjunction with the National Federation of Independent Businesses (NFIB), have filed amicus briefs in support of these suits in Alabama, Missouri, Ohio, and Arizona.

Recently, Treasury adopted an interim final rule on the use of the funds which sets out a complex set of guidelines as to whether or not a state is in violation. An excerpt of the guidance describing this is below:

“If a recipient government (i) reports covered changes that reduce tax revenue (Step 1); (ii) to a degree greater than the de minimis (Step 2); (iii) has experienced a reduction in net tax revenue (Step 3); and (iv) lacks sufficient revenue from other, permissible sources to pay for the entirety of the reduction (Step 4), then the recipient government will be considered to have used Fiscal Recovery Funds to offset a reduction in net tax revenue, up to the amount that revenue has actually declined.”  (page 94)

The states are put in an unfair position where they are already deep in their budget planning and cannot get their legislation pre-cleared by Treasury, but can only dispute a purported violation under a complex set of guidelines.

To allow states to leverage these much-needed funds to the maximum benefit of their citizens, it is imperative that this cumbersome bureaucratic overreach be rolled back. With these restraints removed the funds can be used freely by state governments.

The U.S. Treasury has opened a portal by which state and local governments can request funding from the $350 billion state and local allocation of American Rescue Plan Act (ARPA) funds. 50% of the funds provided to the states will be provided in a first tranche beginning in May 2021 and the other 50% will be provided 12 months later. Funds can be used to cover costs incurred until December 31, 2024.

As these funds become available to states, they would best be leveraged in programs which invigorate the economy, incentivize workers to rejoin the workforce, provide workforce training, and make much-needed investments in infrastructure.